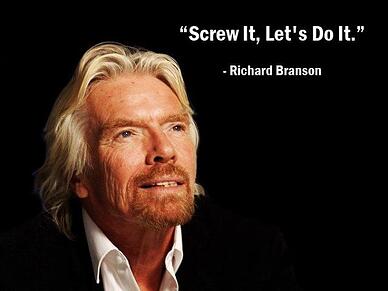 Losing my virginity is one of the books which crops up in almost every reading list on the web for someone who is interested in leadership, entrepreneurship, business or a mixture of these topics. So this book went onto my reading list as besides the biographies of Steve Jobs, Ernest Shackleton, Margaret Thatcher, Willi Brandt, Helmut Kohl, Nelson Mandela and Abraham Lincoln. So far it has been the most entertaining read of all of these.

Richard Branson is the founder of the Virgin Group who is majorly known for their airlines, trains and activities in the music business mainly in the 70's and 80's. Furthermore he is an adventurer who crossed the Atlantic at record speed in a boat and won several hot balloon challenges like crossing the Atlantic and the Pacific. Currently the Virgin Group is a conglomerate of roughly 400 companies.

In the edition of the autobiography which I own Branson covers the years from 1950 to 2007. He gives insight on how he built his newspaper "Student", for which he amongst others interviewed Mick Jagger, and moved on to bigger ventures like his record company or airline operations. The book starts with the near death experience of one of his balloon adventures and return to this point in time later in the book. In the end Branson describes his meetings with Mandela and other leading personalities to build a better future for mankind. Furthermore there is insight given in his marriages and approaches to bringing up children. Failures are not spared and analyzed.

The style of the book is easy accessible and very likeable which is known to be one of Branson's major strengths in business. It covers, sex, drugs, rock & roll, festivals, hippies, how to run an airline, trains, how to fight dirty corporate tricks and much more.

This was a great and easy read with common sense approaches to business. The major messages to take away from Branson are "You have to try everything at least once" and "Give it all you got". Business is about people and with all the mistakes he did he seems not to be shy to talk about them. Make a plan and execute it. Dare to read this book.