Let´s mix some sciene fiction with something that most commonly is perceived as a dull sport for the not so smart if we believe movie prejudices. Arnold Schwarzenegger definetly did not help by picking a robot and a sword swinging barbarian as his first movie apperances to counteract this prejudice. You might reconsider when you listen to him reflect on how to become successful. 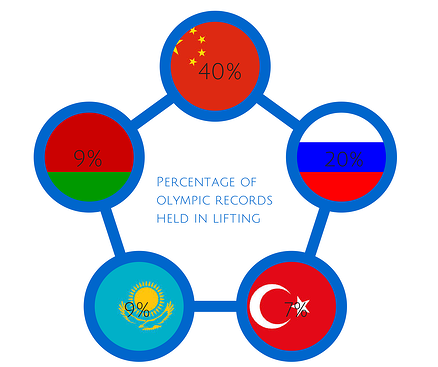 Who thinks about this question?

Joe Weider mentor to Arnold Schwarzenegger, Lou Ferrigno, Frank Zane and Franco Columbo and author of several bodybuilding books pondered about this question. According to him bodybuilding will be widely accepted in society as a means of preventive medicine and the principles of bodybuilding will lead to a healthier lifestyle. The art of relaxation will increase in importance at the same time and leave us more muscly, more relaxed and healthier. You might consider it a bit over the top to see bodybuilding as the saviour of humanity, especially coming from a person who is in this very business and making considerable amounts of money out of it, but looking at athletes, the internet and magazines at every gast station in the country he might have a point about the acceptance of bodybuilding. Weider died in 2013 and most of his books were puiblished in the 1980 - 90s.

Where will the lifters of the future come from?

Currently olympic weightlifting is dominated by the east. Chinese, Russians, North Koreans, Turkish and ex communist countries are competing at the very top for the records in olympic weightlifiting. One greek is holding the torch to remind of the very beginnings of the competition holding the record of 188kg snatching in 94kg class. If it wasn´t for two heavy russian ladies, who are dominating in 75kg & +75kg, China would be ahead of everyone else by a mile. The BRIC´s have already a proven track record in outperforming the west in lifting. Maybe this is a reflection of things to come on a larger scale. There have been correlations between success in the olympics and economic prosperity of nations. Will India join the weightlifting club in a hundred years? What if the Panjabis suddenly decide to lift stronger rather than smashing BRIC´s (sorry I couldn´t resist) on their heads. Another possibility could be that they are all robots, because humankind went extinct a la Terminator.

What will the lifters of the future eat?

Diet is always a big debate in bodybuilding forums and in a personal workout plan. Get fit, get lean & get strong without lifting a finger for it. There seems to be a pill for every need and the pharma industry is happy to provide it at a resonable price. Exploding stomachs and other side effects seem to worry the community not too much. Genetic manipulation will put the doping right in the food of the atletes and into themselves, imprinted for life. There are scary expirements being conducted on mice which involve genetic manipulation for muscle growth. The superwarrior mice outperform their meakly natural combatants in every athletic metric you could possibly fathom. But maybe this trend is not moving forward and people will become more cautious and rigorous about doping regulations.

How will the lifters of the future train ?

It seems like there is a war going on out there. If you are in Europe it might not quiet have come to your doorstep, but in america it is in plain sight. Globo gyms, which have a lot of different machines for isolated muscle training, and Box Gyms, which have more floorspace and concenrate on free weights & olympic lifting, are competing for members and their wallets. The major benefit of running a box gym is the lower upfront invest, as you do not need so many machines. Crossfit is on the rise, just look at the trending videos on youtube and leagues spreading in the U.S. in which people form teams to compete with each other. The experience is more real and isolated as the oldern day gym experience. In a hundred years you might see a billion chinese people meeting up in america to practise some corssfitting in the russian woods (would be a good match up as russia is the biggest country in the world and has the most trees to carry around and chinese dominate in olympic weightlifting).

No matter how the future of lifting might look it seems like some things will never change as long as humans are involved. Food will be eaten, iron will be lifted and repetitions will be counted. It will only be a question of what is being eaten, how the iron will be lifted and if you can do more reps with more weight in a shorter time as the guy next to you.