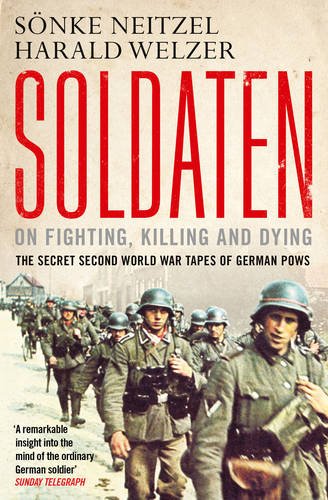 I am of the opinion that this question is not as easy to be answered as it first seems. Soldaten: On Fighting, Killing, and Dying. The Secret World War II Transcripts of German POW will give you insight into the mind of the german soldier in captivity (which is, to a certain degree, a tainted source of information). This is is an overview of my personal main takeaways of the book. If you can speak german, get the original and not the translation, as some of the wording as rather odd in the English version.

About the authors and the research

Sönke Neitzel is a german born historian who has written extensively about the Second World War and is currently a professor at the University of Potsdam. He is editor of the Journal German history in the 20th century. His books include

Harald Welzer is a German social psychologist who studied sociology, psychology and literature at the university of Hanover in Germany. He is a professor at the University of Flensburg since 2012. His books in English include

The book's main source are the surveillance transcripts which the allied troops obtained by eavesdropping into the conversations of german prisoner's of war at trent park and other English facilities. In the time from 1939 to 1945 10191 german and 563 Italian POWs were transferred between three English surveillance camps. There were 16.960 protocols filed for a total of 48.000 pages. This main body of historic material is further underpinned by 538 protocols from various locations in the Mediterranean between 1.225 soldiers and further reports of 3.298 held in Fort Hunt.

The material has been looked at from a historical and psychological viewpoint to get to the heart of what the german soldiers thought, how they saw their place in the world and what the motivations for fighting were. Some of the direct quotes are shocking in their narrative, especially the opening example of the book and the indifference which is being shown for mass murder and rape during the entire read.

A frame of reference is a set of criteria on which judgements can be made. It is an important concept to understand of individuals behave in a certain situation based on his or her reference points. In this book, the concept of frames of reference is used to place the soldiers being analysed in a particular psychological subset.

The frame of reference of the first order is defined as the socio-historical backdrop against which people of a given time operate. This includes what we think we can eat and what not, how far we have to stand apart without invading each others space and what is polite or rude. Based on how it is described in the book (p. 9-10) i would put it closer to human instinct than consciousness

The frame of reference of the second order is more clearly defined in a historical, cultural and geographical sense. For the soldiers, this frame of reference would be the Third Reich beginning in 1933 when Hitler came to power and ending in 1945 when the second world war was lost and Hitler committed suicide in Berlin.

The next subset is the frame of reference of the third order which becomes even more specific. This would be the in the german soldier's case the second world war during the period of the Third Reich, which is different from the peace time before the war in the years from 1933 - 1939.

The last frame of reference relates to special characteristics, modes of perception and perceived responsibilities for a specific situation. Here we are on the level of individual decision making.

The book Soldaten mostly looks at the second and third order as the sources best allow for that.

Violence is still in society

One of the biggest eye openers for me personally was the discussion of violence. As I grew up relatively sheltered I kind of felt that violence is relatively lower than in the times of the world wars, which is certainly correct. However, as modern society centralised the legal use of violence and force to governments, police forces and armies, that does not mean that violence disappeared. It only moved from public places, where it is accusable and punishable, to more private realms. This is reflected in the multiple forms of martial arts clubs all over the world, domestic violence, and human trafficking.

The book discusses and shows with examples the differences and how soldiers from different parts of the military perceive the war differently.

Soldiers of the Wehrmacht buy into the myth of the "clean Wehrmacht" and that they are distinctly different from the "SS Swine" who took a more active part in the holocaust and war crimes. This is made quite apparent with the examples of transcripts from soldiers talking about how they felt about the mass shootings and others ways of killing jews and especially eastern Europeans. The authors point out that this is a skewed perception of reality as there is proof that the Wehrmacht did commit war crimes on a grand scale and supported the holocaust actively.

For soldiers in the Wehrmacht and the ground forces, bravery is the main criteria of success in the war and how many soldiers from their own "Zug" have been killed in defending a certain post. It is harder for them to get recognition for what they do, compared to the navy und Luftwaffe as kills are harder to attribute to a certain individual in ground warfare because of its messy nature.

For the Navy, the main point for success was sunk tonnage. There seems to have been a trend to overstate the tonnage of the ships sunk by various captains to get promoted quicker. Also, the navy started the war with something that could be described as a minority complex. Compared to the long tradition and bigger navy force of Great Britain, the german navy was doomed to play a rather marginal role in the war. Therefore Admiral Dönitz donned especially high toning speeches involving patriotism fanatism and fighting to the last man.

The Luftwaffe had it a lot easier to identify kills and assign them to a certain fighter pilot. It was also one of the most technological and new fields of modern warfare. Therefore the discussions between members of the Luftwaffe are leaning more into technology and describe the human suffering on the ground with bigger indifference as it is like watching a movie. They are not in the middle of the carnage they cause on the ground which leads to a very different viewpoint of things compared to the footsoldiers of the Wehrmacht and the SS. There also seem to have been more awards and possibilities to get exposure to battle for members of the Luftwaffe and in return more prestige to be gained.

The SS is being perceived as the most radical and elite subpart of the armed forces in the Third Reich. They were certainly used as such for propaganda purposes and some members of the Wehrmacht comment in a fashion that they were "only able to shoot women, prisoners, and children". As the SS was more political and their cadres were generally younger, more fanatic recruits, it would have been less likely to find soldiers amongst them who had fought in both of the great wars. The authors find that generally, the SS seems to have been more fanatic and willing to fight to their last breath than the other units based on the protocols, however, there is not as clean a cut to be made as stereotypes would have you believe. As the SS was politically motivated and a fast track to promotions therefore also more medals given out for the same achievements as compared to other parts of the armed forces. This has been remarked upon in the protocols the book analyses.

Another interesting observation is that officers seem to be more likely to reflect on the orders that they receive than the common soldiers. It more likely to find a colonel or general commenting critically about the Führer than on lower levels, where fanatic beliefs seem to be more easily to find. What is surprising for me personally is that the officer corps is not necessarily critical of the holocaust and destruction of other cultures per se, but of the way that it is being achieved. There are several notions made about that the mass shootings of the Jews are to condemned, but that they have to be eradicated nevertheless. For me, this also shows that the propaganda in the years beware worked to taint even higher educated individuals this deeply. I always like to point out, though, that anti-Semitism was by no means a phenomenon exclusive to Germany. Jews were the target of derogative propaganda in most of the European countries after the financial crises in the 1920s hit.

One of the most important moving pieces due to the authors during war time is the immediate group a soldier was surrounded with. As the band of brothers depended on each other for survival, ethics soon went out of the window for the minority in the group to stay alive, even if they were critical of the system. One high ranking individual and his orders, therefore, could tip the balance of survival of civilians, jews & prisoners of war considerably to influence these group dynamics. More often than not, concerns by officers were only muttered in private or after being captured, rather than becoming actual orders.

As a german, I went through the german school system. The second world war and the Third Reich were a common presence in the curriculum, to the extent that I got fed up with it at a certain point. While most of my co-students were quick to say that they would have behaved completely different and would have resisted orders, fought back etc. I myself was not so sure. I always felt that it is not as easy as it is made out to be when you can look back at the past, knowing the outcome, from the comfort of your school desk or laptop. Even if you had reservations or were just plain disgusted by what was going on I asked myself to what extent what you go along ? Where is the final demarcation where you wild have said no, killed yourself, deserted or looked into other options of resistance ? How is waging war nowadays for democracy that much different ? The Nazis were also convinced that their system of beliefs was better than that of their next door neighbors. What differentiates it is the uncompromising conclusions they drew from that. If you think it is easy to decide what is right and wrong during a war I'd like to challenge you and recommend you read Soldaten: On Fighting, Killing, and Dying. The Secret World War II Transcripts of German POW and ask yourself afterward "How would you have behaved in war ?".