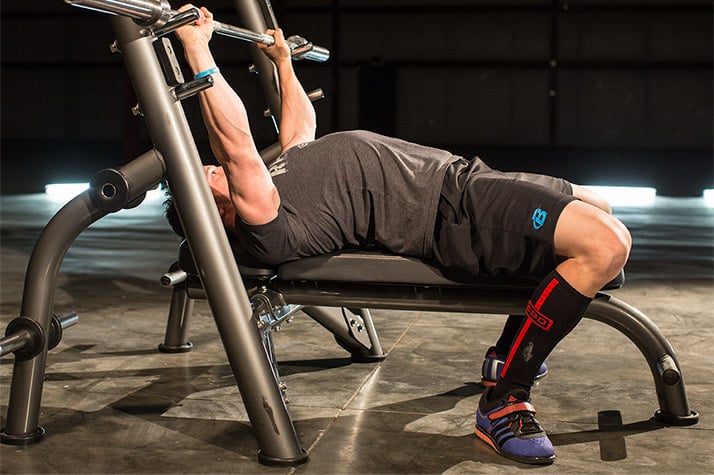 I hit that number when I was 16 and now bench press 150kg after taking a break in my twenties. Yes, college was a shitty time in terms of health and gains...Anyway, I hope you enjoy the read and let me know if you have questions below.

What is the story with the two plates on each side?

The elusive 100kg or 225-pound bench press. The first aspiration many gym goers in the free weight section have. Why is that? Why is the 100kg mark so important and elusive? Some never reach it, others just blast through. But how to get there? Is it about the repetitions? Is it about the amount of sets you do? Where you hold the barbell? Are you genetically or physically even capable bench pressing that much? I hope this article helps you to achieve this first goal.

I personally think the 100kg mark is such a popular one as most people who try the bench press first opt out somewhere between 60kg - 80kg when they first try the exercise. There might be exceptions from the rule depending on size and fitness level, but that puts you at one small plate or one big plate each side. So increasing this to two plates is an ambitious, worthwhile and tangible goal. I achieved this first at the tender age of 16 to then move on to become a slob in my twenties and have to redo everything.

Let's address the point of genetics and capability first. So far the human body seems to be able to bench press somewhere above 300kg without a bench press shirt and around 450kg with a bench press shirt. So based on this you should be definitely capable to bench press 100kg, if you put some work into it.There have also been 100kg plus attempts by people of all ages and sizes, independent of gender. So it is a good goal to strive for and definitely seems to separate the boys from the men/girls from the women to have two plates on each side on your bench press. If you set yourself the goal of bench pressing 500kg I would have said "Long way to go man", but 100kg is absolutely doable. I would even go that far to say independent from age, size, and gender. With this i think we also addressed who never makes it to 100kg, they did not apply themselves or have a very serious disability (and even some disabled people make it.) In case you still excuse yourself here a WR from the Paralympics in Rio 2016:

Based on Newtons law's of physics the mass of the two objects involved in a bench press do matter, in your case your bodyweight and the weight of the bar. The closer your weight to the weight that is being loaded on the barbell the less force you will need to move it. This can become terribly complex when you also include Quantum mechanics and relativity so let us just keep it to Newton for now as this an article on how to bench press 100kg and not to major in physics. What you can take from this though is the lesser your weight, the harder it will be for you to bench press 100kg and, therefore, the longer the journey to achieve this feat of strength. Here is some reference material for you:

Based on these percentages you might not be that strong if you move 100kg on the bench press if your own bodyweight is 120kg but incredibly hulk strong if you only weigh 40kg. These numbers are just general guidances but should give you an idea around how much work it will be for you to bench press 100kg.

The way from my personal experience is to follow the Stronglifts 5x5 program. If you apply, this program you will hit your 100kg bench press for five repetitions in roughly a year. At least that is how long it took me and I consciously decided to start from an empty bar. Here is how the program works out on a mathematical level: 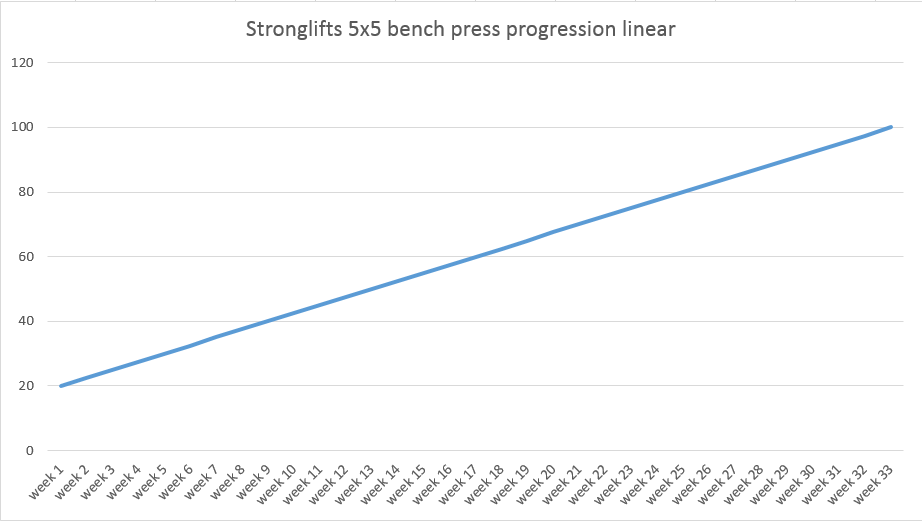 Please see my full review of Stronglifts 5x5 on this blog for more detail on the program itself. Basically, you start with an empty barbell and increase the weight for the bench press for five repetitions by five sets week over week by 2.5kg. This approach is called progressive overloading and is commonly accepted as a very good and simple method for beginning lifters to plan their training until they start to stall. I personally would recommend starting with an empty bar if you can not bench press 100kg yet to really work on form. At first, it might be a bit silly but when you get in and do 80kg for a 5x5 for the first time you will feel like a boss. Before you get too excited that I will only take you a bit more than half a year to bench press 100kg keep in mind that this is the most unlikely scenario to happen as most people have to reset Stronglifts 5x5 as they fail repetitions somewhere in their progress. Than the development curve looks a bit more like this: 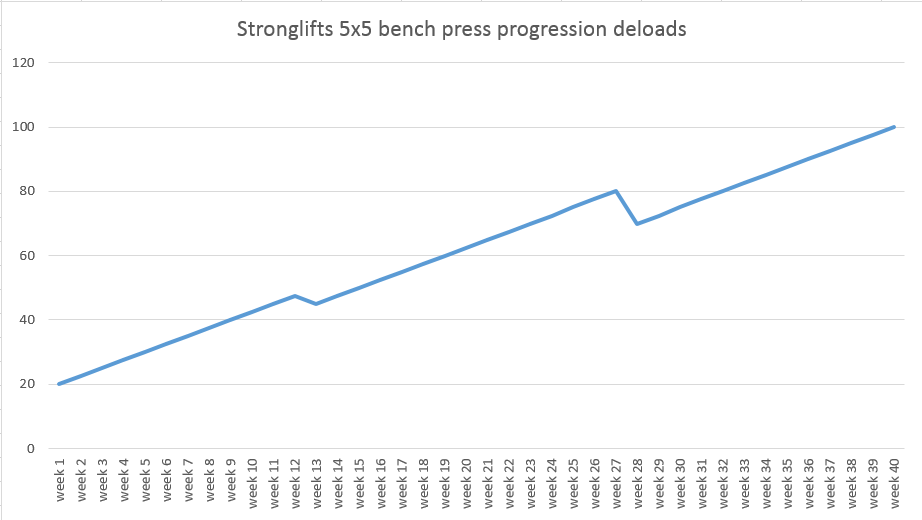 Here you can see how the deloads add another month or so to the progression. The lesser your bodyweight is the more likely you will hit these plateaus on the bench press when you progress towards a 100kg bench press. It all depends on you specifically, but I personally think it is very unlike to expect a 100kg bench press within a year of training if you only weight 50kg. If you weigh 100kg and you have not made it in a year then you aredefinitelyy doing something wrong.

Your setup also influences how much you can bench press and I discussed this in a post which you find at the end of this article.

The most promising road without having to invest too much thinking to 100kg bench press is a starting template like Stronglifts 5x5 or Starting Strength which clearly maps out for you what and how to do it. This the ideal way to get to your goal and take out the guess work. There are also more refined programs which might get you there quicker, but this is something to be discussed in detail with your personal trainer. For example if you do not care about the squat and deadlift you might be able to bench press only. Just keep in mind that you might create imbalances in your body by focusing on the bench press only.