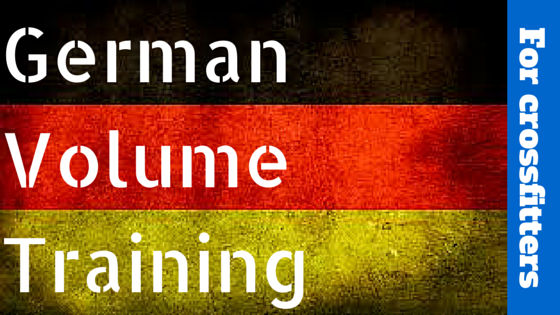 I did German volume training for four weeks in May/june 2015. All in all it is great to gain muscle, practise high repetition stamina for crossfit and automate your form after mastering it. It did not provide the strength gains I hoped for but was challenging and fun. See details below.

If you want the most up to date news or ask direct questions, then you can follow me on Instagram.

What is German Volume Training ?

At the core of German Volume training is the principle of doing 10 repetitions by 10 sets of your chosen exercise at 60% of your one repetition maximum. Between sets you have 60 seconds of rest. You will split body parts as chest, legs & arms. As you will move a lot of tonnage and recovery will be long try to get the maximum punch per repetition by using compound exercises like the bench press, deadlift and squat. Avoid isolated exercises like triceps kickbacks and bicep curls. This might be accessory work, but not at the core of the program.

With this split you will train three times a week leaving one day of rest in between. The growth pains usually kick in two days after you have worked out a particular body group, this was at least the rate for me. My personal program looked like this

You will see the added accessory work later in the videos of this post. The origins (as usual with weight lifting templates) can be argued, but it is said, that it comes from Germany and therefore it gained its elaborate name.

Some powerlifters / weightlifters would argue it is a deload cycle, as you are lifting not as heavy as you are used to. Also most of these athletes do German Volume training off season to go up a weight class. I personally found it to be a shock cycle rather than a deload cycle. Especially the first week sucks. Brandon Campbell, a powerlifting youtuber also names it a deload cycle, but talks like his body is in shock mode.

I was coming off my 10x3 6 week program and a lot of guys in my local gym were doing it. I also thought it would be a good idea to get some volume in to work on my ankle mobility and especially my form on the squat.

In addition I wanted to work on my bridge for the bench press and straightening my back for the deadlift. Switching to following what my gym instructor tells me to do rather than making it up myself for the time being, I got the program and went for it.

What were your results ?

Above table describes my results. Before I started the program I performed the following one repetition maximums:

German Volume Training asks for 60% of your one rep max for each exercise. Calculating those based on my results you would end up with

If you want to know more about lifting levels and whether you are a beginner, Intermediate, Advanced or Elite lifter, you can consult this website. My results put me at advanced to elite for the bench press, Intermediate to advanced for the deadlift and intermediate for the squat.

This also connects to the recommendation of the wendler program to calculate your training loads from 90% of your one rep max, rather than your real one rep max. See details of this principle here T Nation. The article takes a rather negative stand on people not knowing their maximums and lying about them. I would make a different argument why this is a good approach.

Usually your absolute one rep maximum is performed on an ideal day, with ideal conditions, well rested and completely hyped up. Your average gym session just does not work that way. You will come from work, might be deprived of sleep from the day before, forget your lifting belt, have a cold or some other ailment which puts you already at a disadvantaged position compared to ideal conditions. I'll take this advise on board when ramping on the new 5x5 program. 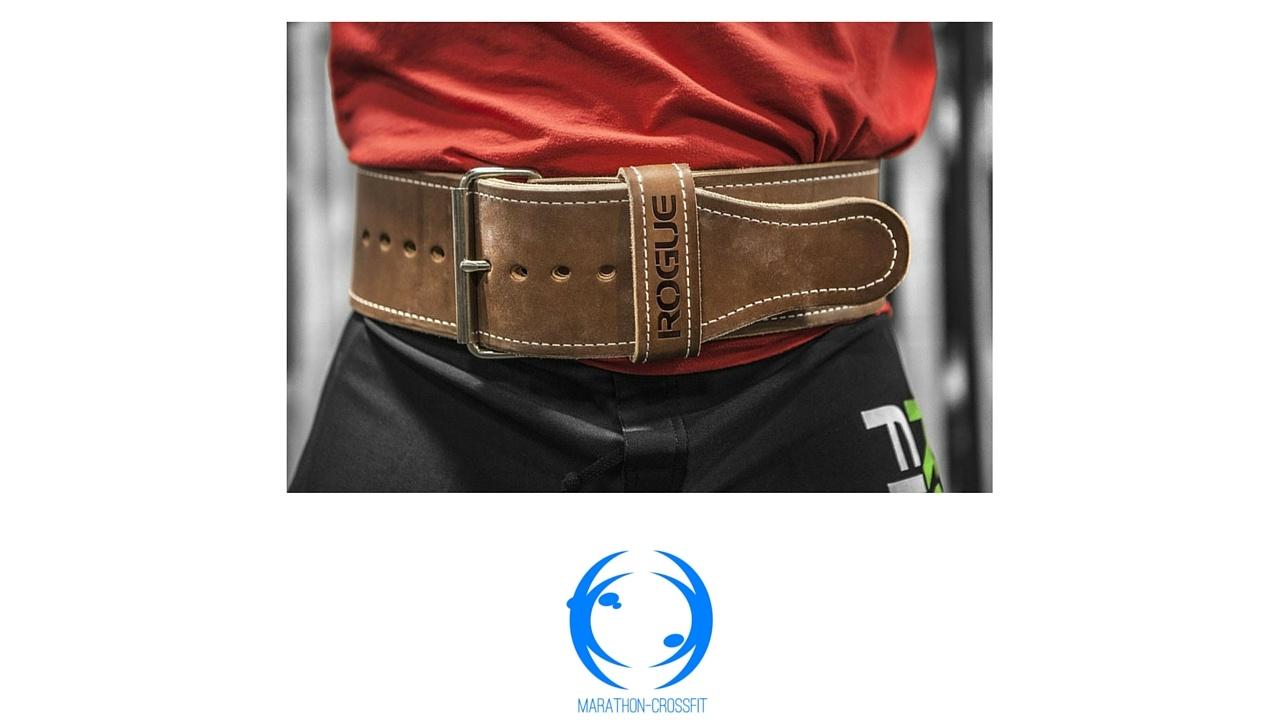 In the first two sessions i started out with the calculated load and found it to be way too hard to even get near the 10 x 10 template which the program asks for. My form was all over the place, it was just too much to bear.

So for the first squat session I scaled it back to 70 kg on the squat rather than going with 84kg after miserably failing at the 105kg deadlift and 81 kg bench press. Call me a whimp if you like. If you are not an advanced to elite lifter you will most likely be well advised to start with 50% of your one rep maximum and make your way up from there.

When you read up about GVT you will see some comments on people getting stronger in the second half of the session due to neural adaptations. My performance shows this to be true only for the deadlift and the squat. The bench press did not have this "booster" effect for me in sets 7 - 9. The numbers do not reflect it for the squat, as I am all green here, but set 5 & 6 were the ones which hurt the most and took the most will power to push through while 7 to 9 felt easier.

Overall I got stronger for the same load on all exercises. This is especially reflected in having to do less splits of the late sets for the same amount of weight in week 4 compared to week 1 for the bench press and deadlift and going up in four consecutive weeks for the squat.

The progress on the squat is especially satisfying. As this is my weakest lift it is good to see that this was the space with the most progression compared to the other two. This  is what you would expect in theory as it is easier to improve on a lift where you are less advanced.

For crossfit this template is interesting as you will perform a higher amount of repetitions as compared to usual strength programs. This plays more to the needs of the Crossfit Open workouts. You might want to swap lifts and do overhead presses, cleans, jerks & other olympic weightlifting style lifts instead of the classic "big three" which are less relevant in the crossfit universe. Kepp in mind while doping this that the olympic lifts are multi joint movements and it is highly controversial what effects it has on your health if you do them for high repetitions.

In respect of my strength capabilities German Volume training is a let down in my book. It is not surprising, but still disheartening for the challenge it imposes on your body. Here is my result of a one rep maximum session four weeks into GVT, which was a failfest all way through: 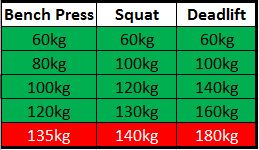 The whole session just did not feel up to scratch and I failed all of my attempts at getting better and even at tryouts to match my former best performances. So when it comes to the ultimate one rep show off German Volume training did not help.

For me a definite yes. I started German Volume training at 82 kg and finished it at 87kg. Unfortunately i did not take my measurements to give you more details around where i gained the most inches, but I bulked up for sure.

Why did you stop it ?

In this instance GVT was only meant to be thrown in between two strength programs, as my main goal is strength rather than muscle gains. However I can see that this can be pushed further.

What are the advantages of German Volume Training ?

Set that your technique is already up to scratch you get 100 repetitions of the same lift to ingrain this motor pattern and become better and more automatic at it. If you are a wrestler, judoka, boxer or any other kind of athlete whose sport is divided into weight classes you will appreciate the fast muscle gains this program provides when you decide or you are forced to go up a weight class. You can hit areas you want to grow as a bodybuilder and the workout is fairly simple. Just do your 10 x 10 and increase 2 - 5 % in the next session.

What are the disadvantages of it ?

As you can see from my results I am now 5 kilograms heavier without any remarkable strength gains. This can be counterproductive, if you want to be a powerlifter and you are training for a meet. If your technique is flawed these flaws will get ingrained and fastened into your motor pattern when performed and repeated this often.It also may put you off that you will sweat a lot when this is done right. Some gyms are just not made for that and if you are the type of guy who likes to smell like a cloud of Lynx to attract some dubious women in the gym, GVT ain't for you.

This program also trades muscle gains over strength gains. You might look the part, but you won't necessarily be able to lift heavy. In this sense 5x5 seems to be overall more balanced. Still it would be fairer if I also did GVT for ten months and then made up my mind as otherwise I am slightly biased to the program which I did for longer.

What results can I exepct ?

The "Internet" talks of 10 - 15 pounds of gains in six weeks with this program. Looking at my own progress I can personally say this is realistic. From a diet perspective I incorporated a pre workout including caffeine and BCAAs and casein afterwards, both mixed with water. The strength gains will be less compared to other programs you could do.

Would you recommend to a friend ?

I would not recommend it to my friends for following reasons:

1. Most poeple I know do not want to gain muscle

2. Most poeple I know would find this very hard as they have never done any of these movements before.

I would recommend Stronglifts 5x5 to my friends as they usually are beginners.

5x5 covers muscle and strength gains and is also not as challenging as German Volume Training. GVT beats you up bad, you already need some buy in into the whole fitness idea to pish through.

Have a look in the videos below to see how much I struggled. I would not wish that on my friends. For all who need to build muscle, are dedicated and know their lifting I highly recommend this program as either a further booster for gains or a shock cycle to your normal training.