Why use a bench press shirt? [Article] 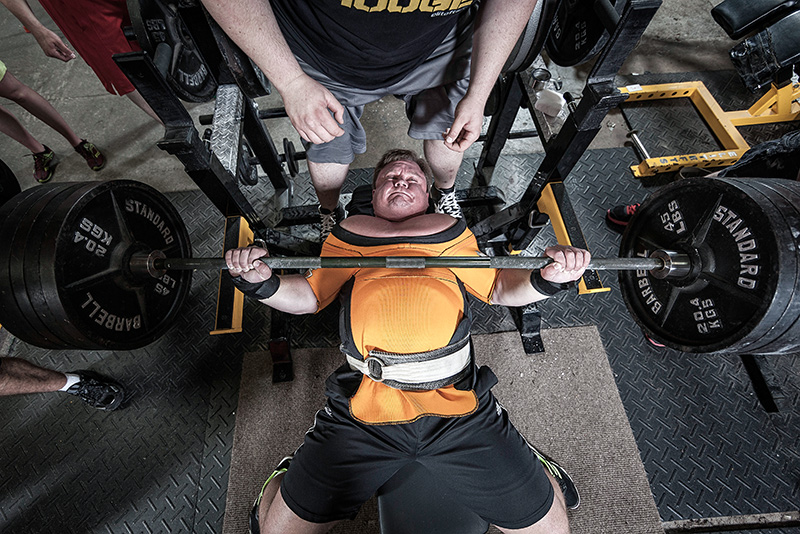 There are two main purposes to use a bench press shirt. The safety aspect has become less important in recent years while the performance impact to increase the one repetition maximum of lifters takes precedence for more modern models. A shirt can be obtained from 50$ upwards depending on your goals and should comply with the regulations of the powerlifting association you want to compete in if that is your goals. More details and further resources for the interested in the article.

After a couple of months of training, you hit the first wall and could not get through it. You start researching different methods on the internet to become better and increase your squat, bench press and deadlift. Most likely though you will be searching for answers on how to increase your bench press as this seems to be one of the popular lifts. During your research, the first comments on YouTube and in forums pop up in which people start talking about raw lifting and equipped lifting and how all equipped lifters are pussies and all raw lifters are stuck in the past. If you are one of the curious on this planet you scratch your head and start thinking about what equipped and raw lifting actually means.

In the next phase, you will enter the realm of curiosity and probably find this article amongst others describing what equipped lifting is. There is a whole world out there which you seldom see in commercial gyms, never mind planet fitness, in which grown men peel themselves into very tight suits and we are not talking ballet here. You have now entered the world of powerlifting and equipped lifting. Equipped lifting means, depending on the association you are competing in, that you are allowed to use a deadlift suit, bench press shirt or squat suit to help you lift the weight. In raw lifting, none of these contraptions are allowed, except maybe from wrist and knee wraps. Again this depends on the rules of the powerlifting association you are competing in.

The bench press and the quest for strength and muscle

Specifically, the bench press seems to have gone through three major adaptations in the last century. Entering the century most people who were interested in strength and muscle performed the floor press using no bench whatsoever. In the 1930s to 1950s, the flat bench press gained more popularity and also the sport of bodybuilding. The most recent evolution of the bench press was initiated when bodybuilding and powerlifting also split from each into separate sports. From my perspective, it is also interesting to observe in what way sports develop. At the beginning, there was only the quest to build muscle and strength. The more people entered the sport the more heated the debate between focusing on muscle growth and focusing on strength became and you got the split between the strength and the muscle camp. Within the strength interested community weightlifting, powerlifting and strongman competitions developed as separate sports. The landmark which is very relevant to the powerlifting community is the foundation of the IPF (International powerlifting federation) in 1972. One of these powerlifters who had an interest in increasing his lifts while minimizing injury risk was John Inzer, who developed one of the first bench press shirts in 1983. Soon lifters realized that these shirts would not only protect them, but also enable them to lift more weight. That is when the debate within powerlifting between equipped and raw lifting started. John Inzer moved on to build a company that still stands and provides equipment to elite lifters all over the world.

While the original idea of the bench press shirt was to prevent injury we are nowadays far removed from that. Today it is about getting into the tightest shirt possible to enable yourself to lift more weight. The idea of safety has been marginalized along the way. As bench pressers are able to move more weight than ever before in recorded history (current world record stands north of 1000 pounds) with help of the shirts you also see more shoulder, elbow and arm injuries. As the weight increases the risk for injury increases too, especially when the equipment fails. There also seems to be a lot of debate on the internet, which in my opinion is caused more by observers of the sport than the actual athletes, whether bench pressing with a shirt is cheating. My personal view is that equipped and raw lifting can not be compared as they are separate sports. The Olympic equivalent for me would be the pole vault and the high jump. Yes, both sports aim to jump as high as possible, but both use completely different means to achieve it while it still helps to have a natural aptitude to jump high to perform well in both sports. Also, the risks involved in the pole vault if something goes wrong are a lot higher as you drop from a higher point and due to the pole, there is also a risk to impale yourself which does not exist in the high jump. I like to think about raw and equipped lifting the same way and respect athletes in both sports for their achievements within their chosen discipline.

Bench press shirts, once you managed to put them on, act like a spring by providing a line of tension due to the way they are built. The work is mainly being done by a band that is about 4 inches wide. The anchor point where most of the tension builds is usually built into the sleeves of the shirt. Expect some bruising here, especially when you are not used to working with a shirt and have not broken it in yet. This process can take up to six weeks. Anchor points and how the band functions can vary from shirt to shirt which can be obtained from as low as 50$ up until 300$ and above. If you are considering to buy a bench press shirt read some customer feedback first and make a plan on how the shirt will impact your training. Do not buy a shirt on a whim and without testing as this leads to poor performance and unsatisfactory results based on what I have read and seen. A bench press shirt is not a case of simply buying it and putting it on like a t-shirt from your local high street store. Think about it more like a scuba diving suit. You would not buy something that your life possibly can depend on without doing your research and proper testing.

Once you have found the right shirt and learned how to use it it will increase your bench press one repetition maximum from 15% up to more than 50% depending on the build and how good you are at using it. Biggest hindrances for these gains are usually that the shirt is too stiff so that the lifter can not lower the weight to his chest for a "good" powerlifting attempt, that the shirt has not been put on in an optimum way and/or is too big and therefore does not provide maximum tension. As for what counts as a "good" or "bad" attempt, this differs from federation to federation and here is a first overview for you to dig deeper:

The use of a bench press shirt is only recommended for serious lifters who also want to compete or if you are one of the people who like to try everything once and you have the surplus cash to spent. If you want a similar tool which is more suited for the mass market a Mark Bell Sling Shot might be a good alternative to a bench press shirt. It easier to put on and off and not as pricey as a bench press shirt, while still enabling you to push  the limits of your everyday bench press training. The only disadvantage is that it will not provide the same gains as a bench press shirt.

The main reason to use a bench press shirt is to increase your one repetition maximum. This makes the most sense if using a shirt does not conflict with your training goals and is allowed in the way you want to compete. For the general public it is, therefore, nice to know what they do, but not essential to reach your fitness and health goals.