People like Ed Coan, Eric Spoto, and Tiny Meeker bench press up to 1000 pounds. It is quite impressive that the human body can basically function like a forklift under the right conditions and with the right training. But how do these people achieve these enormous feats of strengths ? What made them so strong which you can apply right now ?

The fascination with the bench press starts with many young men who first visit the gym. It is also the exercise that is the easiest to do and least scary while still being very manly gripping that barbell tight. At least that is how it was for me back when I did Judo in my teens. The bench press was my favorite and still is the favorite to many in the gym. While in the gym you try to figure out what works and what does not without making a fool of yourself, or even worse, injure yourself in the process. All of the mentioned lifters have been there, but how did they move forward ?

Was it the steroids that brought them forward ? They might have to a certain extent there is no denying it. Some of the lifters above got tested positive during their career. I doubt, however, that this was what got them started and hooked on powerlifting and it only became relevant once they wanted to compete and be the best. Another explanation can be that they found some secret sauce in their diet and repetition scheme. Based on what I have read, seen and done myself in the gym I am also very confident that this is not the explanation on how they became so good at what they do.

There are things that most champions all have in common. They work their ass off and did the same simple things over and over and over until they perfected them. Michael Jordan was not the best because he won some matches. He was the best because he perfected some simple task to that degree that he performed better than everyone else every single day, every single hour. Same with good powerlifters. What they all have in common is that they did tons (literally) of the same movement for years and steadily increased the weight until they perform these insane feats of strength. So to lift like a powerlifter it is all about doing the right, simple things more often and consistently than the others around you.

Know your goals to achieve them

That you found this article already shows that you are researching in a particular direction and trying to make a decision on how to train. Before you decide you have to make a determine what is most important to you. Training in the gym is usually about these three main goals:

A clear goal will help you to carve a clear path to achieving it. The less clear your goal is the more muddled and frustrating your path towards it will become. That is why I am personally focusing on achieving a 200kg squat mainly and cut back on all my other fitness goals to the bare minimum. For the rest of this article, we will assume that performance in terms of pounds moved with the bench press is your main priority.

Powerlifting goals for the bench press

The world record for the bench press at the time of writing is around 335kg raw, which means without a bench pressing shirt. Before you decide to join the brigade of haters and debaters out there that fight back and forth which powerlifting association is best and whether benching with a special bench press shirt is for pussies have a good look at your own goals. The association and shirt discussion are second to that and actually not helpful to focus on what is paramount, them plates on the barbell.

One way to set your goal is to define your goal as a multiple of your own bodyweight. To start, aim for achieving your own bodyweight as your one repetition maximum and move your way to twice your body weight. Once you can do twice your bodyweight you can pad yourself on the back. You are probably the pound for pound strongest person in your gym. Especially when you are of low body weight it is good to measure your progress against multiples of your bodyweight.

The total weight moved on the barbell for your one repetition maximum is another goal to strive for. This is the most common and easiest way to evaluate bench press performance. You can check some references on whether you are a beginner, intermediate, advanced or elite lifter based on benchmarks. The heavier you are the more likely it is that you should optimize your goals to absolute weight lifted for the bench press rather than in terms of multiples of bodyweight.

There are some iconic goals which have proven to be a test of manhood like the 225 pounds, 405 pounds or 100kg / 200kg bench press. This is because it translates to having two or four big plates on each side of the barbell when executing the lift. They are definitely worthwhile goals to have. Just keep in mind that if you only weigh 50kg, a 100kg bench press maximum is already quite impressive and that 200kg would already place you comfortably in many weight classes in official powerlifting competitions. Be patient, the big lifts will come with time and dedication.

Bench pressing like a powerlifter is all about optimizing for that one repetition maximum. Muscle growth comes second to that goal. This influences all choices and little adjustments you can make for the execution of the lift. The main factors for the bench press are:

The number of repetitions and sets is low for powerlifters. As you will only perform three lifts in competition you do not need to pay attention to stamina. Also, you decided to put your efforts into maximizing that one-time effort to forklift those big plates. You will work with 1 - 5 repetitions per set depending on the load. The total repetitions per day on the bench press will vary between 10 -  30, but usually not more. This will ensure that you will mostly work the fast twitching fiber of your muscle. If you look at powerlifters who perform well, most of them are actually smaller than you expect. Strongmen are an exception to the rule. They usually have very good powerlifting totals, but that is just part of the picture of being big and strong to be able to pull a truck.

the load is another factor to consider which means how much weight you actually are going to put on the barbell. You will work with 75% to 95% of your 1RM for powerlifting purposes. The higher the load is, the lesser the repetitions per set you will perform. Smolov Jr is a program which applies this thought process by having you do a 10 x 3 day at 90% of your one repetition maximum. This is one of the extreme approaches.

Rest between sets should be 3 - 10 minutes

Rest between sets is usually somewhere between 3 - 10 minutes depending on how much the set before took out of you. The limiting factor here is usually your nervous system and not the muscle fiber itself. That is why a fail on a big lift looks so terrifying to a spectator (apart from a human being potentially being crushed below several 100kg). The nervous system shuts down and prevents any further force development and signaling to the muscle to twitch.

Grip width for powerlifters is usually wider than the norm to minimize the path the barbell has to travel. In combination with an arch, you can bring down the range of motion to only a couple of inches. Depending on the association you are lifting this technique is allowed to a certain extent or purposefully limited. If you are just beginning to bench press be careful with a wide grip. The unknown stretching of the chest muscles can lead to nasty marks (like it did with me) so gradually widen your grip and get used to it over time. 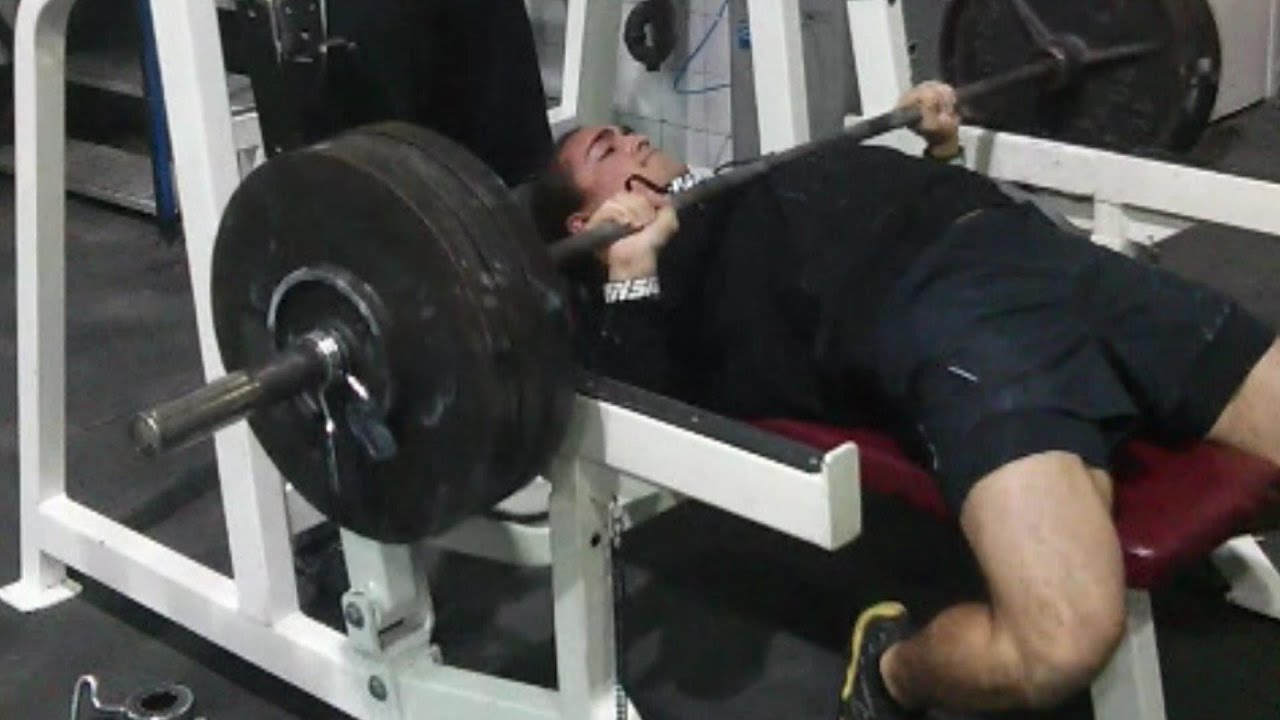 Pause your repetitions at the bottom of the lift

To really bench press like a powerlifter you have to do paused bench presses. This means you stop at the lowest point of the lift and let the barbell touch your chest so that it completely loses momentum. No bouncing off the chest allowed. Ideally, you train with a partner who will give you the command "press" at the lowest point of the lift to stimulate circumstances on competition day. As there are often complaints from powerlifters that the judges are inconsistent with how they are giving their commands, practice this in the gym by varying the pauses with your spotter / trainer. For beginners, just do pauses and do not overcomplicate it. 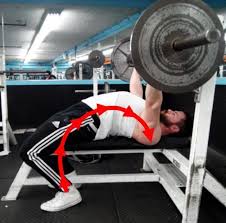 Arch your back for a bigger bench

The arch is another special trade of the powerlifting form of the bench press. You want your arch to be is pronounced as you can comfortably do by bringing your feet as close to your head before initiating the lift. This will ensure that you can use more leg drive during the lift utilizing more muscle groups from your body to push more weight. This is what happens to beginners when their ass comes off the bench during a heavy press without even noticing. Be aware that most associations demand that your ass stays on the bench at all times during the lift.

For the equipment to bench press like a pro the barbell bench press will be the backbone of your training to make you stronger. You can add bands, chains, and boards into the mix, but I would recommend to stay away from tinkering with the range of motion until you feel like you are not progressing anymore. (Advice from Jim Wendler, Strength coach himself).

To gear your benching towards power use low rep ranges at high loads arching your back while minimising bar path. Rest between sets is as long as you need and feel like to hit the next set again without failure. Enjoy one of the most iconic exercises you can do in the gym and have plan geared towards a specific goal.