How you get 10% stronger in six weeks

How you get 10% stronger in six weeks

Six weeks ago I started my new training routine after joining my new gym. I switched from Stronglifts 5x5, which I had done for 10 months, to a modified Westside template with three sessions a week with 10 x 3 repetitions for the including accessory work. I added 20kg on my squat going up from 120kg to 140kg, 12.5kg on the bench press from 122.5kg to 135kg and 10kg on the deadlift from 165kg to 175kg. This added up to an increase of 42.5 kg or roughly 10% on my powerlift total.

The end of Stronglifts 5x5

As I have already pointed in another article on my blog I got bored with the Stronglift 5x5 template and also did not make more gains. Looking back I should have switched after a bit earlier when I started to plateau on the deadlift at 150kg. I still tried and also the squat was not up to scratch. I felt exhausted and had the first signs of over training getting a tennis elbow. I decided to switch my gym and get some proper consulting from a trainer, rather than doing my own thing learning of the internet only. The program did build a great base though, which can not be overstated.

This template is suitable for intermediate lifters based on the information I have gathered so far. Reason for this is that it uses 10 x 3 repetitions aiming for 90 - 95% of your one rep max in the first week for the last three sets and then gradually increasing the weight. Beginners are usually not up for the high load in the beginning as they have to develop the movement patterns to execute at higher load. Therefore a 5x5 program would be advised to start out which usually works at 60 - 80% of one rep max.

We first planned to do it for four weeks but as I was still making gains my trainer said to continue for a another two weeks to milk it even more. It paid off. Here is what the program looks like in detail: 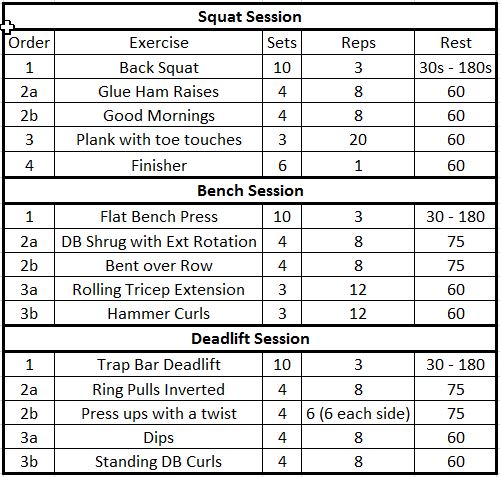 The aim is to progress with each of these lifts through the weeks with more load. You will test your one rep max before starting the program, in my case 120kg squat, 122.5 bench press and 165kg deadlift. From there you calculate your 90% which for my example is 108kg on the squat, 110kg on the bench and 148kg on the deadlift. This is the weight you start with in week one.

If you tested the barbell deadlift instead of the Trap Bar deadlift, you can usually add some extra kilograms from your deadlift, because the Trapbar Deadlift allows for more power output because you are in the frame of the barbell and also your hands are placed in a position which allows you to develop more force from the ground to lift. Furthermore consider how you felt for the lifts in the one rep max and be a bit more conservative where necessary. My 120kg back squat felt not confident so I adjusted for that in my starting week.

I started my first with a 105kg squat, 110kg bench and 160kg Trap Bar deadlift. In each session do a warm up and proper stretching before you start. After stretching use the empty barbell or a light weight for the Trapbar deadlift to warm up further.

You then progress with the aim to do the last three sets of the 10 x 3 in your 90% - 95% range. For resting keep the rest periods in the build up sets shorter and stretch them out as you see fit for the 3x3 in the end. Reme,ber that your body will most likely recover quicker then your nerve system, therefore add another 30 seconds after rest, after you think you are ready to attack the weight again.

If you get all of the reps for the 3x3 increase the weight for the follwing week by 2.5 kg. If you fail, repeat the same weight the following week to complete the 3x3. Only move on, once you have completed the 3x3. If you fail three weeks in a row, consult your trainer as oyu might have to adjust the program or a deload is due.

For the accessory work focus on perfect execution and muscle tension, maybe even opting for a lower weight which you can control fully rather than going all out with bad form. Also here aim to increase the weight as you progress. The Dips can be varied to Ring Dips, the GH Raises can be made harder by holding on to a Dumbbell or weight plate while you perform them. The weight increase for the Dumbbell and barbell accessory work is self explanatory, just pop more plates on or take the bigger pair.

The a und b sets are supersets and meant to be performed alternating.

The finisher is a cardio like exercise where you go 30 seconds all out and then rest for 60 seconds. Pick rope skipping, spinning, boxing, running, sledding or burpees, whatever you may fancy and depending on how wrecked you are or which areas need to improve.

Attached you will find videos of me performing the movements. They are not perfect templates in form, which I will come to at a later stage, but will show you what it will look like when you do the training. Each session will take you roughly 1.30 hours including setting everything up and resting in between sets, warm up etc.

The accessory work was challenging and a great addition to my training routine when compared to the Stronglift 5x5 template. Kept me motivated and re injected the fun into training. Same goes for the 10 x 3 template which makes you move quite a considerable amount of weight. Compared to 5x5 you will do less squatting and more benching and deadlifting per week.

Where I had problems was with the depth of the squat. in week 3 and 4 I had considerable pain in my lower abdomen when having the belt on and performing the squat. You will see this manifest in some poorly executed repetitions in the videos where either there was not enough depth or not enough stability in the core. As this was unpleasant I searched for a fix and came across Layne Norton's squat 101 video on Bodybuilding.com. Now while you can skip the first 1:30 minutes or so of this video the advice is sound from an experienced lifter with a huge squat.

The most important tip for me in this video was about the breathing technique and building up pressure against the belt. Once I figured that piece out, the pain I felt subsided and I also felt considerable more control in my squat. As it is currently my weakest lift, I can use every help to improve. I did not adjust the bar height yet as recommended in the video and neither use chalk on my back, but belt and knee wraps I do use and fell it beneficial for performance and being less exposed to injure. Knee protection and a belt will allow you to move more load with less fatigue, which will bring you more gains at less risk of injury. There is no use in "being a man" and only squatting raw to put yourself in the hospital in my opinion.

The Trap Bar Deadlift felt weird at first, as it is new to me. Also setting up the bulky 30kg Trap bar in the end and putting it away after doing your workout is rather annoying. The hardest part for me was that I feel I have to down deeper with my back to ensure proper form.

The bench press felt good as ever, as it is my strongest of three lifts which I did too much in my teenage years compared to the squat and the deadlift. I can identify with what Norton says about making every possible excuse to not squat free weights. I was that guy in my teens.

If you did Stronglifts 5x5 you will like the accessory work and squatting less per week for a change. Also the fact that you have the chance to gain 10% on your overall as an intermediate lifter might spark some interest in this program.

The progression are also pretty easy to do and you will not have to calculate a lot or put yourself at risk of injury as you might do in the Smolov program. Clear gains which you can log each week, while also pumping your muscles up a bit with high rep sets to attack the areas which the barbell movement does not get to ideally.

Overall you will learn to appreciate using the entire spectrum of weights including dumbbells, barbells, weight plates and a bit of intense cardio mixed in.

hereby some more details on how I progressed through the 6 week program. I had to do one repeat on the 117.5kg squat, due to improper breathing technique, which I fixed through the video above.

If you expect super fast gains or want to get more explosive, this might not be the ideal template for you. The modification of the westside program is majorly due to not using bands, chains and constant variation between the different sets. There were also no speed work days at 60 % of maximum load which are part of the original westside program. For me this makes sense, as I personally believe you should keep the more fancy stuff for shocking your system when you actually need it and currently my muscles can be shocked without using these methods, as I have not done a 3x3 template before. Based on your background and experience this might be too big a drawback and not enough gains in a six weeks period.

Where I need to improve

On the deadlift I have to stop jerking the bar, which you can clearly see in the 175kg deadlift and I have also to take care of lowering my back further ot not expose my back to be round while picking up the weight from the ground.

I also have to emphasize to drive the deadlift and the squat more through the heels rather than my upper body. Some mobility work is due here as my right heel is clearly moving off the ground in all the squats performed. Maybe a template with less weight and a lot of repetitions would be goo advise (German volume program) to fix this.

The bench press is solid overall in my personal opinion but could get some work on my right arm, as it is lagging behind the left one slightly. In addition some work in the lower part of the bench might be useful as I feel very slow there. So incorporating some bands for the future might do the trick here.

I already toppled the current gym leader for the bench and improved the bench press record from 127.5 to 135kg in the weight class 81 - 90kg. Next would be the box suqat three rep record of 177.5kg and the trap bar deadlift record of 275kg. A goal on the way to these ones would be a two times body weight squat at 160kg and a powerlift total of 500kg and more.