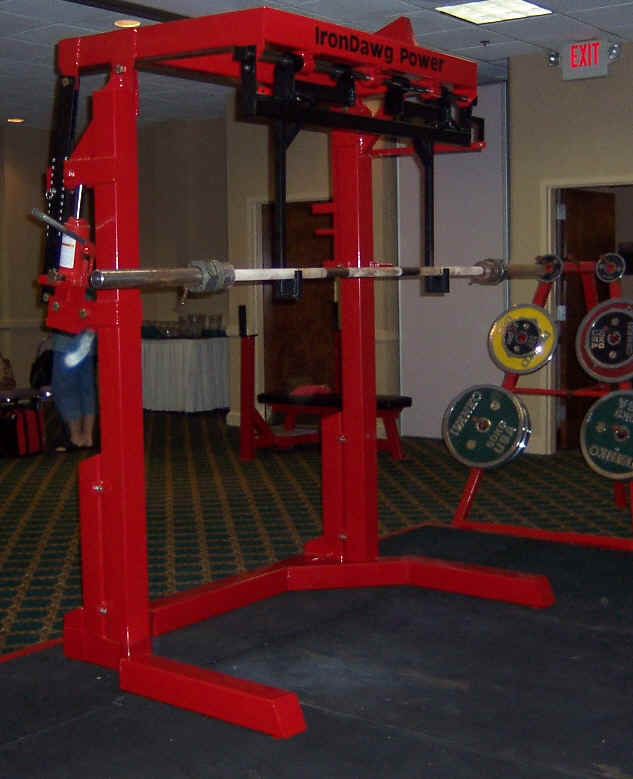 A monolift already describes quite well what this is. It is designed for very high load squats especially used in the westside method and by powerlifters. You will see these machines in several meet videos. These things are massive, bulky and more or less purpose build. So do not read on, if you are not generally interested in powerlifting or assembling your own gym, because you will waste your time.

Why should you have a one ?

There are mainly two reasons for having this station. Number one is to increase the security of the athletes especially under high load. You can combine it with straps which will catch the weight, if you should fail. Still spotters are always advised, especially when heavy equipment is already necessary, as you can conveniently assume that the guys and ladies stepping into those things are not doing it to do a 100kg squat. You will bve more likely looking at 200 kg+.

Second reason is to optimize performance. Only if you have members which are competing at such high levels, that they can not unrack the weight and walk 1 - 3 steps out, consider getting one of these. Most mere mortals (including me) are far from this level. As these machines are usually built very strong, there is not a lot of opportunity to restack / arrange them for other purposes then a squat.

How much is a station ?

For a new one you will be looking at 3000$+. I did not too much research into it, but this seems to be the kind if equipment that should better be gotten used rather than new. Would save you considerable dollars as these are one purpose only and people who want to get rid of them will most likely find themselves short changed for potential buyers. I might be wrong though...never tried. For all crossfit boxes out there there is an interesting alternative at 275$

Do not be fooled by the seemingly low price, as you need an infinity or monster rack from Rogue to make it work, so look at the combined price before making a decision. If you already have a whole lane of these racks, I personally think it is a good investment to distinguish yourself from other gyms. It also looks like a better fit for crossfit athletes who want to bring up their squat one rep max rather than serious powerlifters. But I let you be the final judge of that. I found the topic worthwhile exploring.