basics of lifting programming for beginners 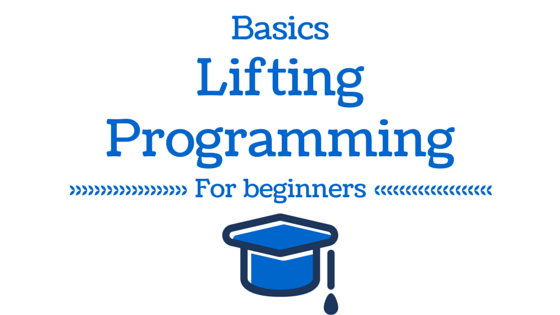 Basics of lifting programming for beginners

This article is geared towards providing you with a general overview of the basic tools to understand how to evaluate weightlifting programs for your personal needs. I will not cover Olympic lifts in this article, as I personally think they are not that suitable for beginners and I personally also have no experience with them so far.

In all you will do for yourself and together with your trainers your overwriting principle should be to always be willing to learn more and experiment with different schools of weightlifting to find the optimum recipe for your personal goals and body. If you look deeper into the respective programs ang blogs you will find several athletes on different programs who produced respectable results.Your personal attitude will matter most in how far you can take a program and your body.

If you lift bad and do not progress first and furthermost the most likely culprit will be yourself. Not the equipment at hand, not your trainer and not your program. Keep this in mind when reading on.

However, by laws of physics and biomechanics, certain ways of training are more likely to produce one desirable result over the other based on their structure. Your own experience and experience of others with these programs will help. So learn, share and try to improve. The fact that you are investing the time to read this article already shows that you are serious.

The most commonly known and referred to variables in weight training are numbers of repetition and amount of weight. These are the easiest to understand and most obvious, as even a seven year old understands that it harder to lift a bigger weight more often than a smaller weight. Once I dug deeper into training, and especially crossfit, I soon realized that there more variables than these two. This realisation helped to find more points to push myself out of my comfort zone to make gains.

- Number of training sessions per week

- Overall time of a program

The number of repetitions os determined by how often a movement is being performed without any rest. Someone who can more repetitions with the same amount of weight ist stringer than the other one who can do less

This is a principle I first discovered doing research into the westside method and is not that commonly known in commercial gyms and people who just start out training. If you use a band for resistance or put chains on your barbell, your the load of your pull up or bench press performed will modify during the movement rather than stay the same.

This concept can be used to break through plateaus for overall weight lifted. If you bench 100kg without load modification and you can not get pass it, maybe try to load 80kg on the barbell and add 25kg of chains for a total of 105kg. By this the load in the lowest point of the bench press will most likely around 85 - 95 kg and steadily progress towards the 105kg.

When you go back to the 100kg lift you might by able to complete your full sets to move on.

An individual who can lift 5x5 100kg two times with only one minute rest between sets is stringer than someone who rests for five minutes between sets. This concept really hot home with me when I was doing research an breakingmuscle. You can modify your rest intervals, to make the individual workout session more or less challenging. This is also the main reason, why I am personally minimising talk time in the gym, rather than maximising it.

Closely related to output over time, but still slightly different. This basically says, that there are ideal windows on how long your should keep your muscles under tension (translates to how long your set takes) to achieve a certain goal. This table gives you an overview in relation to your goals & repetitions

Tonnage is the total amount of weight you have lifted over a certain period of time multiplying your repetitions with the weigh lifted for a given session. Your aim to get stringer should be that overall tonnage steadily increases, if your aim is strength gains. Tonnage is one of the simplest methos to compare different programs.

Number of training sessions per week

The more someone can train a week under high load, the fitter he is. There is a lot of talk on the net about overtraining and periodisations, which all have their place. In my personal opninion this is only relevant for poeple who want to compete and have to build a peak into their performances which has an overlay with the day of their respective competition.

Overall time of a program

Take into consideration how long a program is. Some programs have baked in periods which can not really be divided or stopped at any given point without making massive sacrifices. So be smart and think first of you want to commit to Smolov which is a 13 week program or stick to a 4 week German Volume Training template.

For each lift you can vary the grip which makes the lift easier harder or easier depending on your overall physique. Some positioning will give you more leverage than others. Make use of this concept to vary your training as needed.

Same principle as with the stance. You can decide if you lean against a wall, lay on the ground, do an incline or decline push up / bench press and how wide your feet are apart on the back squat.

The higher the speed of the bar, the more velocity the lifter produces, therefore the stringer he is or more capable to transpose his strength into actual force on the weight due to better technique (the strongest engine with an inadequate gearbox will never get its full horse powers on the street to produce forward force).

The longer the movement and fuller the range of motion with the same amount of weight between two lifts the stronger the lift is. Powerlifters use this concept to their advanatge by minimizing the way the bar has to travel in the benchpress by arching their backs, which is within the rules of most Powerlifting associations.

Intensity in this table defines the percentage of your one repetition maximum weight for the lift you perform. If you your maximum for one rep on the squat is 100kg 70% means 70kg. A.S. Prilepin used data from the 60s and 70s of his athletes to come up with a generally applicable system of optimum repetitions at a certain load to train.

Generalisations are usually problematic due to specifics of each athlete and might not hold true for you. However it is good to know this table to make an informed call of where the programs describes in this article stand in relation to this. If you go out the boundaries of the table you can conveniently assume that the program is aimed at shocking your system / overloading you to get gains. If it is remarkably below this, you can conveniently assume, that it is a less challenging program and more suitable for general conditioning rather than strength gains. 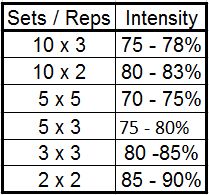 The back squat will most likely be a centerpiece or one of the central lifts you will be doing either for crossfit, olympic weightlifting or powerlifting. This table is to help you to decide on load and how to switch you training up for the back squat. Again just as a general guideline that may vary between individuals. The more experienced you get, the most likely you will deviate from these basics to achieve the results you are aiming for based in your training history and build.

Loading guidelines for the push press and bench press

For the Overhead press or push press you will do considerably lower weight than for the back squat. The bench press might be close, but should generally be lower than your back squat.