Can Marathoners be good crossfitters: January 2015 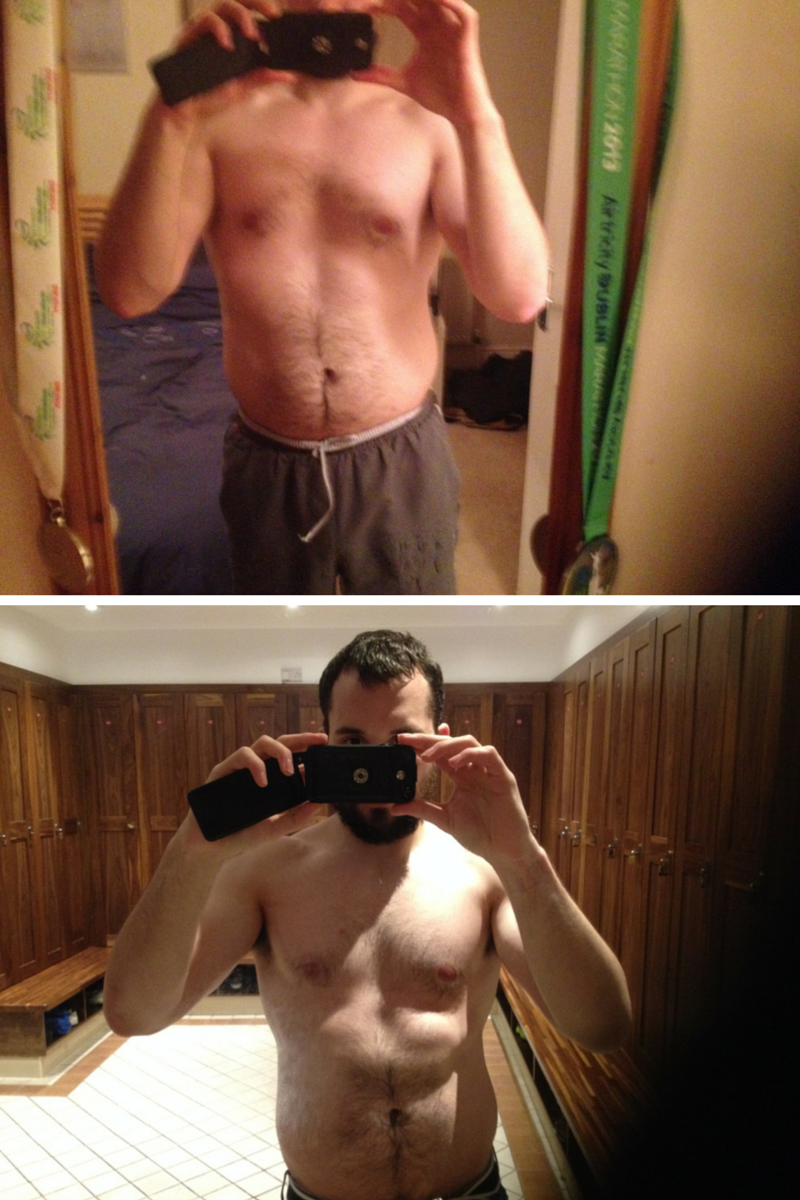 Can Marathoners be good crossfitters:

This year i will track my progress in numbers and pictures on my marathon/crossfit journey on a monthly basis and here they are for January:
Distance run: 95.17 miles / 152km
Weight lifted (excluding warm up sets): 72.5 tons
Max deadlift: 150kg
Max squat: 127.5kg
Max Bench: 100kg
Fastest 5k: 22.18
Fastest 10K: 51:16
100 Double unders best: 4:10 mins
There was some bad news this month and I am injured. I have to stay away from lifting heavy for a month.
I am majorly using the Stronglifts 5x5 program and added 100 double unders for time after my runs to get some traction on there, as I am not really good. I also substitute the easy run here and there for a more intensive row to progress in that area. Surprisingly the time to do a 5k row and a 5k run are not too far of each other, if you are not too picky about it. 19:06 minutes for a 5k row puts me in a good position on beyond the whiteboard.
The pictures ábove compare last summer with January as a starting point. As we progress through the year I will add month to month before/after montages.

In January I got the feeling that i might be hitting the end of the Stronglifts 5x5 progression and have to switch to the 3x5 program soon. I am in the bracket of 100 to 140 kg squat where usually is the spot to change. Still the app did not tell me to switch yet so i press forward. I am full of praise for this program. It brought my powerlifts to a great level. What is also interesting is that in overall output the 5x5 session you do completing all sets are a lot higher that the ones with higher weight, where you do not complete all sets. In this comparison you see that Workout B has less overall output than A. This is majorly due to the 1x5 Deadlift set which is high weight per lift but not a lot of reps in total in comparison to the 5x5 barbell row in workout A. Also the bench press has usually way more weight to contribute than the overhead press in workout B. If you want to see the details of the 5x5 program, read this post. 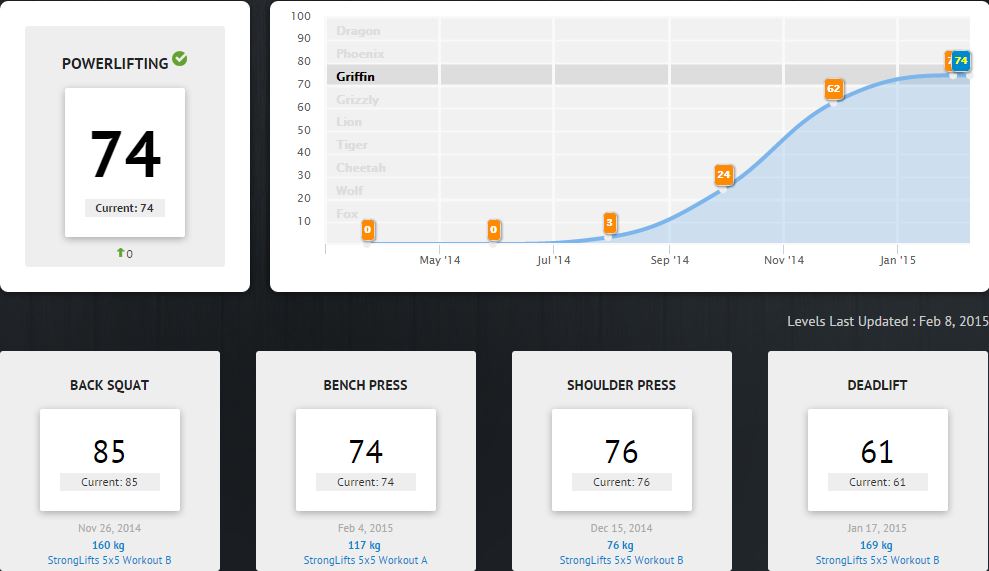 The feeling I am getting with the 5x5 program also manifests in the numbers on beyond thewhiteboard as I am not improving as fast as I used to. Which makes sense, as the higher your level gets the harder it gets to add quickly. Still progression can be seen on the dealift, as I managed to nail 1x5 145 kg Deadlift on January 17th and 100kg 5x5 for benching on 4th of February. The back squat stagnated, as my numbers are inflated due to bad form. I have to work on those, I am not as good (or bad if you are a 600 pound squatting beast) as the score makes one believe.

What I have added in this month is double unders and you see the progression here. I suck at them and the next goal would be to bring them down to 100 double unders in 3:00 minutes rather than my 4:10 current best. An area for improvement would be to get the length of the rope right. Currently It just does not feel optimal. Also I have to jump higher and get a better feeling for when to crank the skip rope to make it swirl around me two times at the right time.

As stated above i clocked a considerable amount of kilometres running. What I am very happy about is that I did a 2.30 hour run on 07.02.2015 without stopping at a pace of 5.30 per km. I am getting close to doing 30km in training in my long run. I think that is the longest I have run without walking in between as at my marathons this was about the time when i hit the wall and started to occasionally walk. Promising for Vienna in April, still a long way to go. Also I am back under 4:00 per km on interval runs which is roughly back to form of mid 2014 which is good looking forward to the season.

I went to the doctor after having a wierd lump on my elbow for roughly two months now. I have been informed that both of my elbows are inflamed and I need to rest them for a couple of weeks. At first I was very disappointed and inclined to ignore the doctors advise. After talking to my girlfriend and reading a bit of stuff on the internet, i decided to go with what the doctor said and regroup. I will not stop training as I am still allowed to run, even though rope skipping is forbidden. It will be aaaaaaaaaaaaabs February and I found the following routines to focus on my weakness of bodyweight training:

I will stay away from 5x5 Stronglift for February, even though it does not make me happy. Same goes for push ups and pull ups until the end of my antibiotics. I think this is the wiser decision in the long run. Hopefully the February progression picture will show some aaaaaaabs ;). We will see.

If you liked what you read