All in all Stronglifts 5x5 is only an option for powerlifters who are very early in their career and even then it might not be the optimal option if you are fully committed to the specific lifting that comes with being a powerlifter. If you are still on the fence on what you want to do in the gym or want to postpone the decision whether you go for for strength or muscle mainly, 5x5 is a very good middle way to travel down.

Stronglifts 5x5 is a beginner program for lifters which can be easily followed in the gym. This is achieved by its easy progression and supporting material like the stronglifts 5x5 app and the corresponding website. If you wanted to dive deeper on the topic, just follow my blog where I have already reviewed the program and discuss its usefulness from my perspective for several purposes.

"a form of competitive weightlifting in which contestants attempt three types of lift in a set sequence."

According to the first google search that I have done.

To be a bit more specific the three types of lifts performed in powerlifting are the bench press, squat and deadlift. In a competition the contestant will get three attempts on each from which the best will be totalled for the meet.

A meet is usually referred to as a powerlifting competition. The lifter with the highest total wins the day.

Main differences to olympic weightlifting are that the lifts are usually less explosive and because the powerlifting sport is so fragmented with different rules and associations, it did not make it to being olympic yet. This is also what it has in common with Karate and professional boxing. (Amateur boxing is an excemption as it somehow managed to be better and more centrally organised). 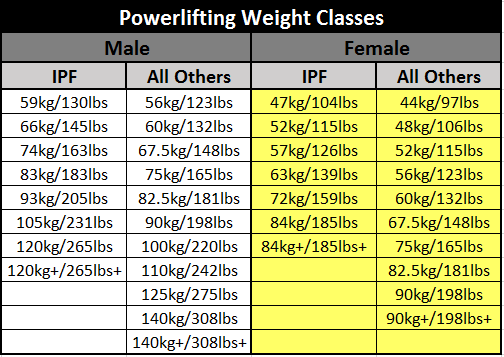 What you usually find is that the heavier the lifters get, the more they are able to lift. Here you can already see the distinction between the IPF and all other associations and their defintion of different weight classes. You can dive deeper in the article how to pick your weight class for powerlifting, where the graphic was taken from.

Another debated topic is raw lifting compared to supported lifting. Raw lifting generally means that you are lifting the weight without the help of any additional gear, usually a bench press shirt , squat suit or straps. You will find a LOT of opinions around whether people who use gear are weaklings and so further. I personally think that discussion is a bit pointless as strong individuals usually lift a lot with or without gear.

Strictly speaking, if you are a powerlifter already, Stronglifts 5x5 won't make that much sense for you. If you are an aspiring powerlifter, it is very likely that you decided to become one, because you already like lifting in the gym and the raw strength of powerlifters peaked your interest. Therefore you can conveniently assume that you would be beyond complete beginner status and somwhere in the Intermediate range. As Stronglifts 5x5 is designed for beginners mainly, it would not be optimal for you.

In addition some poeple might make an argument for incorporating less repetitions, but therefore working more regurlarly with higher loads, to make a program more specific to the needs of powerlifting.

In both of these scenarios Stronglifts 5x5 is very likely not the go to option.

If you are just starting out with lifting and want to lay a solid foundation to decide at a later stage whether you want to go into powerlifting, bodybuilding or olympic weightlifting, than I personally think Mehdi's program is a very valid option to consider.

If you are already a pwoerlifter this program most likely will not meet your needs as it is not advanced enough. For anyone who is just starting out and ramping up, has to learn technique properly and has not made up their mind whether power or muscle is first for them, I think Stronglifts is a very solid option to work with for half a year to a year until moving on to other programs.