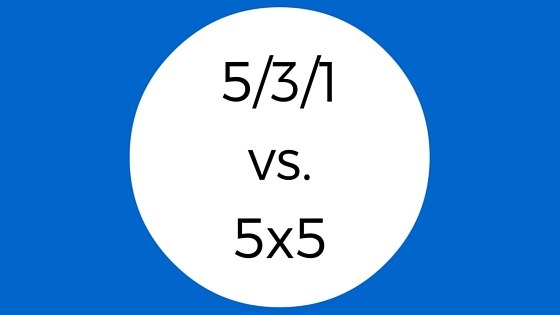 Both programs do what they say on the tin. After running each of them for a considerable time I can attest this. If you are a beginner go with 5x5. Intermediates who are training for the pitch rather than the lifting platform will find a good companion in 531, once the initial understanding of running the numbers for this program is established.

Marathon Crossfit is about lifting stringer, thinking deeper, and running faster. I have done three marathons so far and developed my bench press to 140kg, squat 150kg, and deadlift 190kg over two years. The difference here is, is that I do not just analyze the programs based on my knowledge, I actually do them for you and present you with the results and according data. You can check on my progress on my youtube channel and learn more on my blog.

Regulars on my blog and Intermediates can skip this section, but if you are new to lifting and currently ask yourself the question what the hell you should do, here are some lifting basics for you to help you out:

Sets of five = The middle way between muscle gains and strength

Whatever the program and rep scheme you pick this basic and simple knowledge will help you to know why you are doing a specific program. Concluding from this both of the programs discussed in this post are more on the strength than muscle gains spectrum.

What is Stronglifts 5x5?

Stronglifts 5x5 is one of the most popular lifting programs out there and is considered to be a beginner's lifting program. It is often compared with the starting strength program that has been established by Mark Rippetoe which is also aimed at newbies for weightlifting.

SL 5x5 utilizes the Deadlift, Barbell Row, Bench Press, Overhead press, and Squat. You squat in every session. You will train three times a week. The aim is to complete all five sets with five repetitions to gain the right to increase the weight in the following session.

If you want more details please read my Review of the Stronglifts 5x5 program based on doing it for one year.

What are the benefits of 5x5?

The benefit of this program is that it can be started with an empty bar and no one repetition maximum has to be established to start. Also, it accounts for setting a personal record in each session which is also more suitable for beginners than intermediates, as they progress faster. No thinking is required, a lot of references and a very well-made free app complete the package for beginners.

What are the disadvantages of 5x5?

It is very focused on making gains quite fast. If you are a beginner and there is no coach to correct you, you might ingrain bad form on the lifts like doing half squats, deadlifts with rounded backs, and touch-and-go bench presses. The design of the app and the program also can lead to prioritizing gains over form, which is a recipe that works long-time stalls and plateaus, which I can acquit by personal experience.

Furthermore, 5x5 has been modified to be used by the masses and does not account for personal differences on the lifts, physique, and weak points. I would personally recommend that you get assessed and some accessory work given by a coach. Also, let someone check your form on the first three months on 5x5 on a regular basis to adjust for shortcomings.

How many times do I have to train on 5x5?

5x5 makes you train three times a week. You go to the gym, then take a day off and go back again.

What kind of gains can I expect on 5x5?

The finishing statistics were a 122.5 kg bench press, 120kg squat and 165 kg deadlift one rep maximum starting from an empty bar for myself. This kind of progression to roughly 150kg squat, 120kg bench press, and 180 - 200 kg deadlift can be observed by many other examples on the stronglifts 5x5 webpage until people have to switch to a different program.

Jim Wendler 531 is also a lifting program that was designed by ex-footballer and powerlifter Jim Wendler after he felt that he was not fit enough anymore. He felt that the powerlifting programs he followed made him short-breathed and unfit while still being able to lift a lot of weight. As he wanted to change he applied theories from his football days and combined them with his lifting experience to design 5 3 1.

The 531 core workout utilizes 90% of your one-repetition maximum as a starting point to formulate the program from there. The lifts being used are the deadlift, overhead press, bench press, and squat. You will work with 4 cycles, one with Top Sets of 5, one with top sets of three repetitions, and one with a heavy singlet top set. On 5/3/1 the goal of the final set is to do as many repetitions as possible. The last round on one cycle is a deload week for you to dial back and regroup to then start a new cycle with more weight.

Based on its structure 531 is an intermediate program that progresses you rather slowly. This has the added benefit of less risk of injury, but the drawback of taking a long time to peak. t is also not designed for powerlifters to produce one optimal lift at the end of a season.

If you want to know more detail about how the core principle of the Wendler program works, check out my explanation of the Jim Wendler calculator.

The program is done quickly and does not get boring as quickly as other programs because of the variation between weeks and the as many repetitions as possible challenge at the end of each workout.It is also a good companion for professional athletes who want to get stronger, but not risk an injury in the weight room, as it is not their main professional focus. In principle, the design of Jim Wendler also allows to run it indefinitely and easily jump on and off, once understood.

What are the disadvantages of Jim Wendler's program?

The core routine does not cover all aspects of strengths and personal weaknesses. It is also a suboptimal design for peak performance for Olympic weightlifters or powerlifters. For beginners and people who do not like numbers it also has a higher barrier to entry as thinking and adaptation to ones, needs are required.

How many times do I have to train on this program?

If you do not speed it up or slow it down you will train four times a week. This can be tweaked, but I would suggest you try the standard first, before making your own customizing.

What gains can I expect from this program?

I moved my bench from 122.5 to 140kg, my squat from 120kg to 150kg, and my deadlift from 165kg to 190kg on Wendler by the time of writing. I did this within seven months and the progress is well reported on my youtube channel if you wanted to dig deeper. This process is not finalized yet as I intend to run Jim Wendler for as long as 5x5 and then do a final wrap-up. So check my blog for updates if you are interested.

Which program to pick?

I think Stronglifts is a strong candidate for beginners who want to get bigger and stringer who then can move on to Jim Wendler as I did once they start to stall and get bored. If you are beginning I would personally not recommend the 531 workout. Other options for intermediates are madcow 5x5 or smolov. Here it highly depends on why you want to lift to pick the program which is right for you. If you are someone who is supporting their team sports efforts and will take the risk of injuries on the pitch rather than on the lifting platform for breaking records, I think understanding Wendler will come to a great benefit to you.

Both programs work while Stronglifts 5x5 accelerates you faster than Jim Wendler 531. If I had to do things over i might have paid more attention to detail laying my foundations on 5x5 and would have quitted it a bit earlier to switch to 531. On 531 I honestly would not have done anything differently, because I was fed up with the 5x5 rep scheme after doing a year of SL.